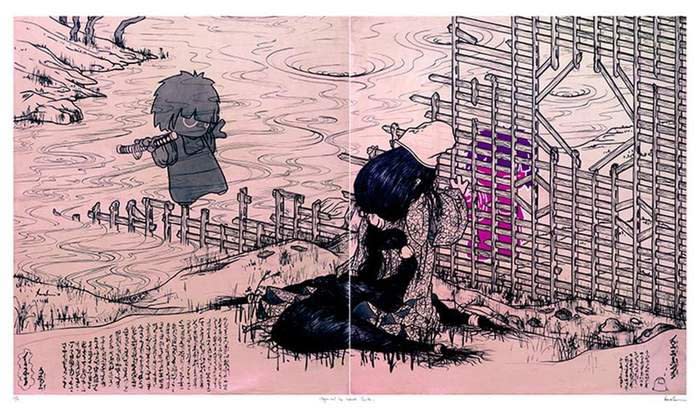 “My dissertation at university was called something like ‘the limits of the human’ and, rather lamely, attempted to explore what might lie beyond the limits of human consciousness and if such a thing existed, how one might access such experience. This was a thought that fascinated me and the sense that I could in some way feel the confines of my biological humanity led me to explore ideas of the sublime, the nature of being and truth. All the metaphysical good stuff. That line of exploration felt like it stopped after uni, and I went back to painting pictures that made me laugh, or moved me in some way that I found difficult to explain. The effectiveness of these pictures was related, amongst other things, to the stories that they told. The ‘better’ the story, the ‘better’ the painting. ‘Better’ is somewhat ambiguous, but I had a sense of what it meant so, like the puzzle, I just tried to keep piecing bits together.

Somewhat surprisingly, as it turns out, what felt right is some sort of archetypal representation of the nature of being, and a fairly well trodden description of a specific type of action within that territory. I say fairly well recognised; it appears that I have been unconsciously exploring the same tales that parts of humanity have been telling themselves for thousands of years. Perhaps something like automatic storytelling? Recognisable from the earliest known Sumerian creation myths, through the Bible, and on to Star Wars, Harry Potter and beyond. It is interesting how the function of story may have changed throughout that time, and how our respective societies recognise the nature of an authoritative narrative. Can the societal rate of change outpace these historical metaphysical explorations, or will they prove timelessly attached to the essence of our humanity? Social media has given everyone the power to tell their own story, but has it also helped people lose sight of why they are telling it?

I think I am trying to tell stories about telling stories, which is perhaps why I’m hesitant to pin Megan down to a single narrative. She’s not really a person, she’s more what a person does, or at least, could do. She is the embodiment of the idealised state of perpetual becoming. Oh…..She’s a hero”